Before you read this post, read this:
Al Jazeera: Hygiene and Heartache

If you can’t be bothered to read that, don’t read this post.

Homeless Woman with Dogs, by Franco Folini on Flickr

The Al Jazeera article just made me cry, and I don’t do that much. Homelessness in all its forms is a concern of mine, but reading about what these women go through really got to me. On a day when I’ve been doing yard work and I get stinky, I can run inside and shower up real quick before work or before going out in public as a disgusting mess.

Maybe it’s because I’m one of those people — okay, one of those women — who is not the ideal of womanhood in that I sweat: I do not perspire gently or “glow.” I sweat and I stink, in all ways, all over — truly gross. I’ve warned my husband not to get too close to me at such times. I’ll never forget dragging out an old batch of T-shirts from the back of the drawer several years ago and thinking I should use them for yard work. They were clean, washed. I saw some GAPO on some of them and it prompted me to smell them. There was a lingering odor of old sweat washed many times. I was sitting on the floor with this pile of T-shirts around me, smelling the pits and wrinkling my nose. “Ugh. Eew. Ugh! Yuck. Really?”

Nitram walked into the room and gave me the side-eye. “What… are you doing?”

I handed him one of the T-shirts. “Smell this… in the armpit.”

He did, and made an appropriate face, handing it back to me with an odd look of —- dare I say it — almost pride, or some kind of weird respect on his face. “You — you are a force to be reckoned with.”

Thank heavens for our house, our warm shower, and all the daily things we take for granted that go along with that.

Homelessness comes with a myriad of problems generally inconceivable to most of us. This post in particular focuses on hygiene — female hygiene — but trust me, there are other and many more problems that are a daily concern to homeless people — hunger and warmth and health, to name a few. Respect any person would give another person they pass on the street — that’s a big one.

Oh, really? If you even have to think about that one, well then: Fuck. You. 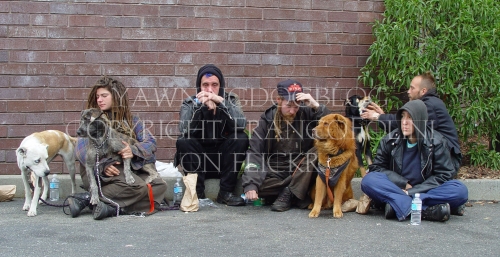 Homeless Group with Dogs, by Franco Folini on Flickr

As is often the case, women have a special sort of hell reserved for them in this instance: hygiene. (Women have the same hell reserved for them in regular life, too  — so many men haven’t a clue to what it takes to be one’s own definition of clean, much less a man’s definition of how a woman “should” be clean.) Men don’t bleed out of their genitals monthly, that’s one thing. Men don’t have to shave their pits to feel attractive. Nor do some women, but most of us still feel the need to do so. I’ve been shaving my pits since I was a teen, and if I let it go too long, the feeling of that crispy, growing bit of hair under my arms drives me crazy. I think: Ick, how do men live like that? Yuck! But it all comes down to what you’re used to in your life. And so many women are used to being at least somewhat smooth-skinned, and clean in their gennies.

See, because it doesn’t matter if you just want to just keep clean, or what country you’re in, or how smelly you are or aren’t in your regular life, or if you’re male or female. It’s just a basic thing with homeless people that aside from those who have mental/emotional/psychological or other unimaginable problems that prevent them from taking care of the most basic of necessities for themselves, there are the others who are “like us.” Seriously: truly just like us, or your version of what “like us” means, but without a home or house — who quite literally do not have a fucking pot to piss in. Or a tampon or sanitary pad. Or toilet paper. Or access to a shower or other basic sanitary facility in which they don’t have to worry about being raped or disrespected in some way.

Don’t make me do your homework for you. See what kind of homeless assistance is available to you locally: it’s only a click away.

And if you feel a need to make a judgmental comment on homelessness in general in response to this post, you’re reading the wrong blog. So go back to FB and spout off there. Otherwise: Thank you.