The magic of puppies 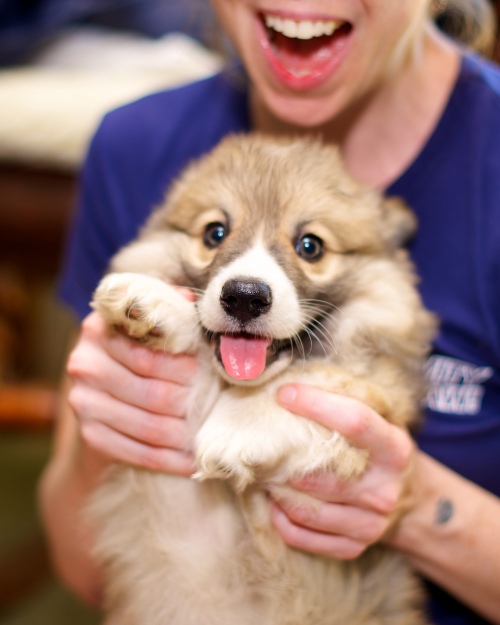 So yesterday, I was at Redding Roasters and there were three or four other people hanging out and talking with Kaitlyn. After I’d bought the world’s best coffee, Kaitlyn turned around and then came out from behind the counter with the most adorable, fuzzy little Corgi puppy in her arms. She had a big grin on her face and I immediately squeed and reached for the puppy. Kaitlyn gave it over and I stood there cuddling it and kissing it (hugging it, petting it, squeezing it and wanting to name it George…).

The puppy was splayed out on my chest with its warm belly on my left boob and its head on my shoulder and I never wanted to let it go. I asked if it was a boy or girl and heard a voice from behind me: “Her name is Maggie.”

I turned around to see a woman standing there smiling and realized that when Kaitlyn had brought the puppy out, she had been about to reach past me and hand her back to her mom, but I’d intercepted and puppy-nabbed.

I babbled something like, “Omigosh I stole your puppy I’m so sorry I didn’t realize can I still hold her a little bit more oh pleeeeease?”

The woman was laughing and said of course I could, and I cuddled the puppy like she was going to be taken from me at any moment — which of course she would be soon as her mom got tired of me slobbering all over her baby. The woman was very nice and didn’t seem at all fazed by my reluctance to let go. I finally realized I should hand the puppy over to her mom before I had to be asked to, so I did.

I never thought to ask Kaitlyn why the puppy was behind the counter. Maybe I wasn’t the only puppy-napper at Redding Roasters that day.