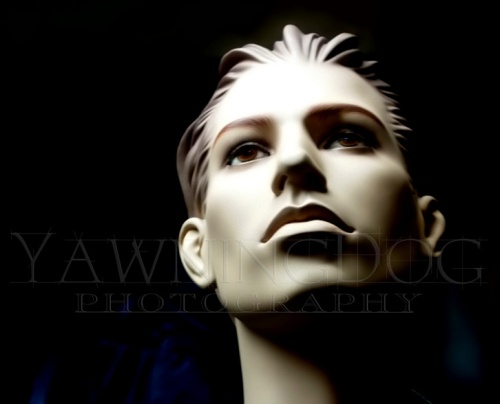 At Madame Tussaud’s New York, I got to indulge my pre-Halloween spirit.

Nitram and I had walked around the city for a while before we got there, then took our sweet time going through the museum. One of the first things we noticed was that the figures look very real as you’re walking toward them, and you begin to feel rather impolite as you stare. Then, at some point in getting closer, you can tell they’re not real, so you go right up to them and peer deeply into their eyes — and suddenly they look REAL again. Like really scary real why am I so close to this person real. Quite disconcerting.

We came to a space that was just a whole wall of pairs of hands, palms out. After spending a little time studying them (more interesting than it sounds, believe me), I said, “Oh! Look, Jon Bon Jovi’s hands!” Nitram rolled his eyes.

I glanced around and saw that no one was in the space with us, then went up on my tiptoes and pushed my boob into one of Jon Bon Jovi’s hands. Nitram covered his face. Of course I couldn’t stop talking about it for five minutes afterwards.

After all our walking around we needed a break, so we found the cafeteria at Madame’s. There were several waxworks sitting here and there at the tables, which made us laugh (at one point I had walked up to an attendant in the museum to ask a question, and it wasn’t until I got pretty close to him that I was sure he was real because he was standing so serenely).

We got a couple of bagels and took a seat in the middle of the nearly empty cafeteria, Nitram sitting to my right. Neither of us talking, we just relaxed, and soon I was daydreaming, chin in hand, my bagel forgotten.

Through my reverie I realized that the guy walking toward us couldn’t keep his eyes off of me. He was sort of weaving and bobbing ever so slightly as he carried his tray of food, hesitating then coming forward again, his puzzled gaze fixed on my face. I didn’t break my thousand-yard stare even though my eyes were starting to water. When he got almost to the table next to us, I woke up my face and straightened up a bit, smiling brightly at him.

He about fell over, nearly taking a small table with him. His knees actually wobbled and so did his tray. He grabbed the back of a chair and sat down hard and I started laughing as he said, “OH. You scared me! I didn’t, I didn’t know if you were real or not!” He put his hand over his heart and panted, laughing. I was delighted. Nitram missed half of it. The guy said to him, “Well, you were just siting there eating and not talking with her or looking at her, and she wasn’t moving…” I told him I hadn’t meant to do that to him, just that I was daydreaming and when I saw him looking I had to put it to the test. He was still getting a huge kick out of it, and I said, “I want to do it to someone else.”

People had been walking through the cafeteria the whole time, passing by on their way to the rest of the exhibit. I told Nitram to just do what he’d been doing, and not look at me. He decided to read a museum brochure to make it look even more like he was “alone.” Having a ringside seat, the scared guy was trying to eat his sandwich and not grin at the same time. I returned to my wide-eyed, chin-in-hand pose, facing more toward the passers-by this time.

It didn’t take long. A mother and daughter slowed down as they went by, the girl asking in a loud whisper, “Mom, is that one of THEM?”

“Shhhh! Honey, that’s not polite!” And then the mom stared at me really hard. When they were almost out the door I winked at the girl and her mouth made an O. “Mom! Mom, it moved…!” “Shhhh, honey!”

Nitram and the guy were having trouble keeping straight faces, but they settled down when another few people came in. This time a couple of teen girls went silent as they slowed down and stared at me, then began giggling and nudging and whispering to each other. The people around them kept glancing over, and I couldn’t take it any longer, my eyeballs were burning. I sat up straight and grinned and waved: “HelLO!” The girls levitated and screamed, and everyone around them laughed.

The guy I’d first scared told us it made his day.

It certainly made mine. Why do we humans like to scare one another so much? I mean, I know I’m not the only one who loves to do this to people, and I love to get scared, too (well, a reasonable scare that has nothing to do with really scary stuff like spiders or heights or fire). Scare, good. Startle, bad.

Unless, of course, it’s happening to someone else.