The Fountain of Youth, Doggie Style

Pickle has had a couple of years shaved off her age! She is now officially 4 years old instead of the 7 the shelter had guessed, and she’ll turn 5 on June 5th, 2011. Our wonderful vet, Dr Aubrey Fitch of Bethel Veterinary Hospital, reevaluated Pickle’s age by  inspecting her teeth and coat and general demeanor. I had told Dr Fitch that everyone who meets Pickle first asks if she’s a puppy, and when I say no they ask if she’s maybe 3 or 4. Everyone has done this. Pickle doesn’t act like she’s older or near 7, and it’s been bothering me that she was stuck with an age beyond her years. Giving her a good exam and taking into consideration how long she was with her previous parents and at both shelters, 4 or 5 is about right.

So if you want to take a few years off your age, go to the vet!

When Nitram came home tonight, Pickle was thrilled to see him. She wiggled herself all over the place and mushed herself onto him and she was so happy. So was he!

It’s lasted all night, too. He took her out for a short walk and she went right with him without a backward look. He had her sit for the leash on/off, and for a treat, and before being invited onto the couch next to him (where he was promptly conscripted to belly rubbing).

She’s been really relaxed all evening. She’s in her chair in the living room now, while he watches TV in there. All is well in Pickle’s house. :) 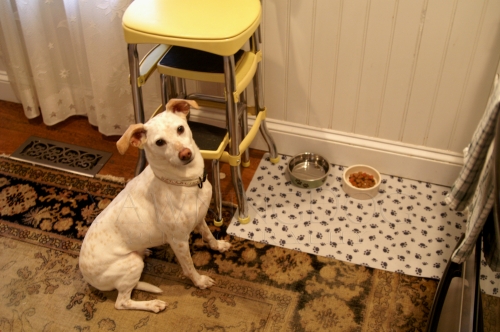 She’s here, she’s happy, and already getting rather spoiled. Working on some leash training, doing lots of cuddling. When we take the leash off the wall hook she starts wiggling happily like she’s going to wiggle herself in half. She hasn’t had any accidents so being in the shelter for a few months didn’t affect her previous housebreaking, which is nice.

The shelter estimates she’s close to 7 years old, but she acts very young. She’s a Dalmatian/Whippet mix. They said she is a “flight risk” in that she’ll shoot right out the door when you open it. Just a couple of hours after she was home, Nitram opened the door without checking to see if she was behind him and she ran out onto the porch. He was afraid she’d run into the road so he tried to grab her, and missed. She screamed because he scared her, and she ran the rest of the way onto the back deck, which was good because she can’t get to the road or driveway from there. We got her back in the house and she was terrified of him for a few hours after that. He felt awful. But she warmed up to him again, just not fully yet. She’ll sit next to him on the couch, let him pet her and rub her belly, but won’t always come to him when he calls. He was petting her last night and told her she was being fickle, and I thought he said she was like a pickle, hence her name.

I think we may be letting him be the one to give her training treats for the most part, for now, to get him back in her good graces. She’s very treat-oriented so we’ll have to be careful to stick with the tiny training treats, but we’re going to take advantage of her love of them to help motivate her.